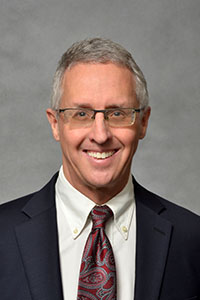 Dr. Anderson has been a member of the faculty of the School of Dentistry since 1984. He has directed the undergraduate curriculum in occlusion since that time. Dr. Anderson also has staffed and directed residents in the School's TMJ and Orofacial Pain Clinic since 1984.

Dr. Anderson's research interests include investigation of clinical measurement of occlusion, occlusal wear, clinical diagnosis of temporomandibular disorders and related headaches, clinical trials in the treatment of temporomandibular disorders and clinical measurement of facial cleft and craniofacial anomalies. He has also developed a recent interest in the translation of concepts of evidence-based health care into clinical dental practice.

Dr. Anderson served for three years as Chair of the Department of Diagnostic and Surgical Sciences and then served as the Senior Associate Dean of the School of Dentistry from 2000-2007. In 2009 he became the Director of the Cleft and Craniofacial Program replacing Dr. Karlind Moller who had directed the program for over thirty years.

Dr. Anderson was named interim dean of the School of Dentistry by Executive Vice President and Provost Karen Hanson effective November 21, 2016. He was named dean on March 26, 2018. On March 15, 2020, Keith A. Mays became interim dean and Dr. Anderson continues to serve as professor.